Blue White Future (BWF) is a non-partisan, non-profit political initiative founded in 2009. We offer a new paradigm for the political process which governs the attempts to reach a two-state solution to the Israeli-Palestinian conflict. In addition, we promote the internal Israeli discourse concerning the need to properly absorb settlers as a way of helping reaching such solution.  Thus, Blue White Future provides tools for the Israeli leadership in implementing a two-state solution.

It is a known fact that the majority of the Israeli society supports a two-state solution, a necessity in order for Israel to keep its identity as a Jewish and democratic state.  We try to translate this support into reality.

For three years, attempts at negotiations between Israel and the Palestinian leadership have failed because of a lack of trust. It now seems highly unlikely […] 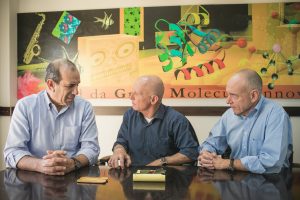 Opinion piece from the heads of BWF on Newsweek

How Peace Can Come to Israel – Beware the Quick Fix As we in Israel watch the events unfolding in Washington with consternation, and wonder […]

Is a Two-State Solution Unachievable?Fathom

How To Avoid Previous SetbacksTimes of Israel

Gilad Sher interview for chanel i24

A FRAMEWORK AGREEMENT FOR AN ISRAELI-PALESTINIAN PERMANENT PEACE